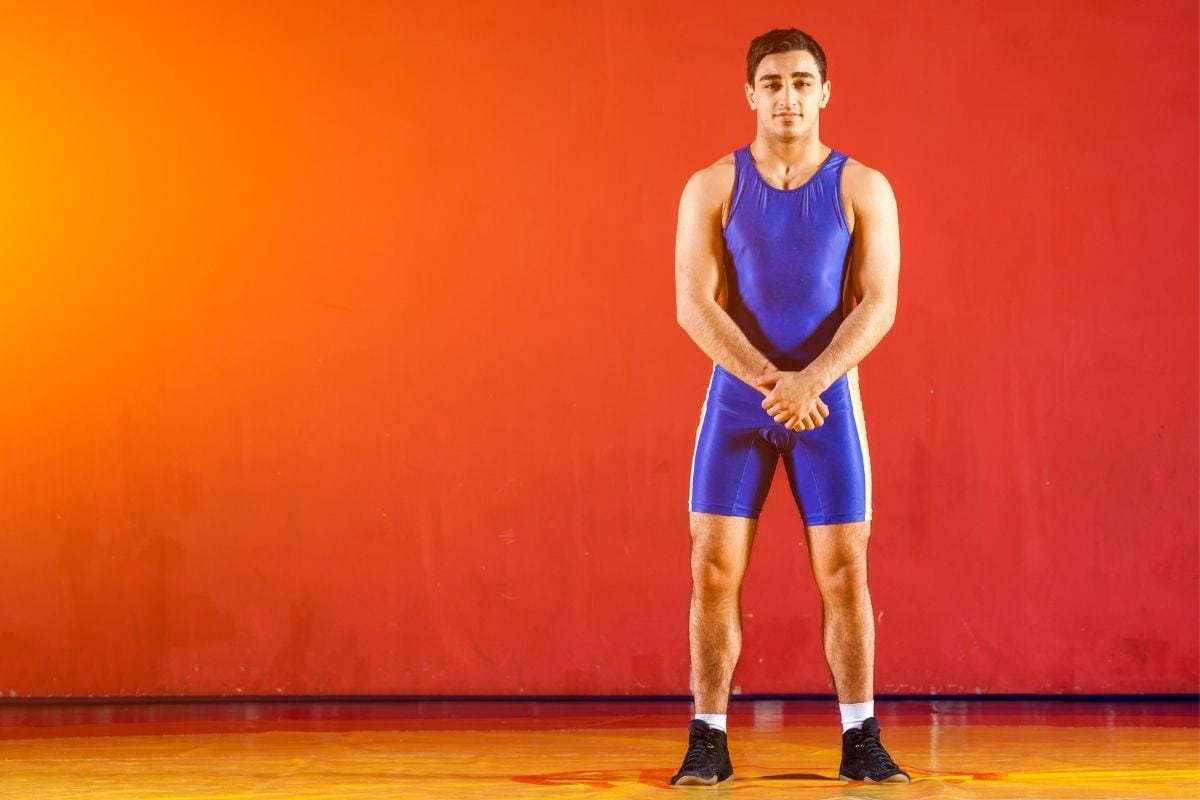 If you’ve ever watched a wrestling match, you’ve probably wondered what the wrestlers wear under their singlets. Well, here’s your answer.

Wrestlers usually wear jockstraps under their singlets to keep their groins from being squashed, seeing how often they toss each other around. Some wrestlers even wear compression shorts or boxer briefs.

It’s crucial to wear something underneath your singlet because they’re designed to be as thin as possible and aren’t always enough to keep you comfortable.

In this article, I’ll drill down into the details to learn more about the options available to wrestlers under the singlet.

Why Do Wrestlers Wear a Jockstrap Under Their Singlet?

Wrestlers wear a jockstrap under their singlet because jockstraps give wrestlers a lot of flexibility of movement while protecting their groins. Many wrestling coaches advise wrestlers to wear jockstraps because of the adaptability of adding extra protection.

And because a jockstrap is a fabric pouch that holds everything in place while allowing sufficient breathability.

Some coaches believe that by wearing it, a wrestler can perform better in a fight because the fuel muscles become more robust and effective, and adrenaline levels rise throughout the body.

However, because jockstraps pull the groins up and away from the body, most wrestlers refuse to wear them to avoid shame. And they choose an alternative, which I have listed below.

Why Do Wrestlers Wear Compression Shorts Under Their Singlet?

If the singlet of the wrestlers tears up, they will still have another layer to protect what is exposed if they wear compression shorts. It’s also an excellent alternative to a jockstrap.

Compression shorts provide you with more freedom of movement during wrestling. It comprises a stretchy, breathable fabric that grips your body while still allowing you to move freely.

Compression shorts keep the groin area secure by supporting the genitalia and preventing injuries during a game. But that’s not all. It also has a number of health and performance advantages.

Wearing compression shorts boosts blood flow; and oxygen to the regions wrestlers need the most, allowing them to push off their opponents.

It also lowers the risk of strain or injury by reducing muscle exhaustion and muscle soreness after wrestling.

They are preferred since they do not have elastic straps that might dig into the skin when moving. Wrestling singlets can sometimes reveal too much thus- compression shorts will keep you from exposing everything to the crowd.

Why Do Wrestlers Wear Boxer Briefs Under Their Singlet?

Boxer briefs provide freedom of movement and provide little for an opponent to grip onto during a wrestling match.

Although briefs allow for more freedom of movement, they lack the protection and security of jockstraps and compression shorts.

Is It True That You Should Not Wear a Cup Under Your Singlet?

Yes! While a protective cup can help protect its wearers from abrupt groin hits, it is nonetheless recommendable that they not be worn in wrestling alone because it can be riskier.

Wrestlers should not wear a cup under their singlet for several reasons:

Because the chances of being hit in the groin during wrestling are low, there’s no need to bear the many disadvantages of a cup and being unable to wrestle freely for something unlikely to occur.

If you still insist on wearing a cup, make sure it’s one that’s integrated into your shorts, briefs, or jockstrap. It is to ensure that the cup does not move during the match.

Even professional wrestlers do not use cups to protect themselves from injuries caused by bumps.

Instead, professional wrestlers wear tight underwear or compression shorts for additional stability and to keep everything in place.

Is It Ethical for a Wrestler to Wear Nothing Underneath His Singlet?

Wearing nothing underneath allows you to move as freely as possible for wrestling, which is an important part.

Some organizations, however, may ask a wrestler to wear something below a singlet because the competition involves pulling and slamming, and singlet tearing is common.

As a result, it may be preferable to wear something to avoid being exposed in front of a nation.

What Do Female Wrestlers Wear Under Their Singlets?

Wearing nothing under a singlet can be problematic for female wrestlers. Although it is not permitted to grab clothes in wrestling, if this occurs by accident, a wrestler should wear at least a layer underneath to avoid exposure.

As a result, all high school female wrestlers in the United States are obliged to wear a compression top with shorts beneath. Hence, it discourages many females from participating in wrestling.

However, because the singlet is thin, some women are uneasy about exposing too much skin.

Compression tops and shorts will help female wrestlers preserve their modesty and avoid embarrassment while also providing support and increasing mobility, which will enhance their wrestling performance.

What Did Wrestlers Wear Before Singlets?

Wrestlers wore many different clothes before singlets, ranging from nothing through wrestling trunks, pants and shoes, black tons, and eventually singlets, depending on the era.

Starting with ancient Greek wrestlers, who didn’t wear any clothes since they believed the opponents would grab at their clothes; therefore, it was better to go uncovered.

They began to dress later. Wrestling trunks were one of the first types, followed by pants and shoes.

Later on, they wore black toms, which consisted of full-body tights with a black crotch guard on the outside.

Finally, singlets became the new wrestling outfit. The NCAA initially banned one-piece singlets, but by the early 2000s, wrestlers were allowed to compete in a two-piece singlet with a compression shirt underneath.

What Else Do Wrestlers Wear?

During a match, wrestlers are supposed to wear wrestling shoes. The shoes are composed of lightweight material, so they don’t restrict the wearer’s movement and provide grip on the soles and ankle support.

Wrestlers can also decide to wear headgear or ear protection during the matches, but this is mainly a personal preference.

Some high school wrestlers wear T-shirts or rash guards underneath their singlets. The purpose of wearing these sorts of shirts is to absorb sweat. Too much sweating affects their ability to stand and dominate their opponents.

By now, you should have a good notion of what wrestlers wear underneath their singlets and why. Wrestling is a highly worthwhile combat sport and martial art that many fighters employ to achieve their goals in mixed martial arts.

Some of the greatest MMA fighters of all time have strong wrestling backgrounds and, no doubt struggled with what to wear under their singlet at one point or another.